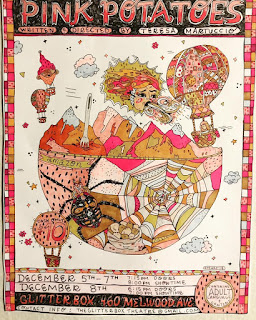 But what is an alternate reality? We assume that those who beg to differ from the mainstream have a social debt they refuse to pay. Always some kind of retribution along the path to the grave, one, and two-- an escapism in our imaginations which, we must hope, is querulously "real".

I live a life of constant dread and sucidial thinking, interrupted occasionally, with the help of drugs and perhaps, art, by the FOMO-laden minefields exactly depicted in this production. Touching on a world better than myself, with those artists with their brazen sexuality and good work and better lives. The grass is always greener but I think the point is that the grass is greener because it is separate from us.

To deny the existence of our imaginations, even as they live out alternate lives, is to do ourselves a disservice. Haruki Murakami's "Hard Boiled Wonderland and the End of the World" shows that in each of us is a greater life than the one lived outside. We are all mendicant then to this stronger internal life even as the lights outside wink out one by one.
Posted by Peter Webb at 9:22 AM