Contrast black power with white power and don't say anything that isn't obvious: what's the point? And then Spike Lee has the police come out in favor of black power. The ending has the clips of Charlottesville and the murder of Heather Heyer. The film is very insistent that the white supremacy of the 70's has evolved into what we have today, we see the typical piece-of-shit Klan members and sort of the rituals and banality and the one guy who's actually dangerous, and then a character study of David Duke which is interesting. But the logic of the film falls apart constantly, the writing is flagrantly flat pretty often, Adam Driver apparently decides to stop acting a few scenes in. It's not really the comedy of contrasted positions it could have been for these reasons... it's a mess with some good scenes... I like Laura Harrier a lot and I was shedding tears in the early scene at the bar which is like, she recounts getting molested by a policeman earlier in the evening, and then the whole bar disco dances.
Posted by Peter Webb at 7:50 PM No comments:

Lamentations of the Flame Princess, the role playing game publisher, reintroduced me to trpgs and I’ve bought $100s of their products and love most of them, legit lit. ok reviews:

GOING THROUGH FORBIDDEN OTHERWORLDS:
Zzarchov is talented so it’s weird to see something so bland. The crux is either melted-together maggot men, some summoned demons, or some one-off magic items. The layout is standard “constantly refer back to the map on page one” stuff. It’s a dungeon with some basic features and no strong attractions. None of this is inspired.

INTERIOR ART: Scrap Princess’s pieces are nothing special, for Scrap, meaning they’re moody and fun but nothing is huge or central it’s just accents.

SHE BLEEDS:
The most interesting of the bunch, this is basically a lotfp prestige class based around menstruation. Takeaway is, there’s no referee-only information, so this could be a very gory player’s tool and would work best as managed by a player.

However there are several unwieldy elements-- tracking rituals and the timing of the moon’s phases, overspecific bonuses/penalties. Also the blurriness of the in-fiction cult writing, like the use of capitalized pronouns and only capitalized pronouns to refer to the goddess and her cult, is just bad literary technique. The last couple pages which clarify some of this content read as sort of an apology for the unclearness of the text.

INTERIOR ART: the soft compositions of Rachael Tew here seem like DeviantArt quality, not much detailed, sketched together pictoral symbols. really did not enjoy these.

SOUNDS OF THE MUSHROOM KINGDOM:
Easily my least favorite although Raggi is usually my go-to. This just details some samey mushroom mans (I do like how they’re “mans”) and some like mushroom monsters. There’s no dungeon, nothing feels clever or interesting, it’s like a joke.

INTERIOR ART: Serviceable and cute and detailed illustrations by the Magnussons albeit they can’t do much to help.

OBSCENE SERPENT RELIGION 2:
My favorite of these. Rient’s writing is inspired and well-informed when describing a medieval hamlet. I feel educated on what any such hamlet would be.

Nonetheless the central premise: “The point of this adventure is to provide the players with a little slice of the world they can get invested in, then to cruelly rip it from them to see what they do about it” is flawed, for my use. No hamlet is particularly special enough to deserve all this detail in my games. To go into detail is suspicious- if we play Lamentations of the Flame Princess there’s misery around most corners.

That being said it might work. I have a player who would loves personal and peaceful detail like Fraulein Gela and she (the player) would possibly get sucked in. These characters are well-written enough to stick in my mind after one reading. The end result would be yet another terrible outcome from hope which is a commonality in the games I’ve ran.

This writing is skilled enough to be subtle, it’s effective, and simple, and the she-creature at the end is a concise image attached to a long table with fucked-up shit on it. My group might not be a match and I have doubts that the structure of the module-- luring people into safety with a detailed hamlet-- is a good bet.

INTERIOR ART: pretty good and has an impressive full-page piece featuring two snake-bellied mutants which sold me on the mutants. that full-page illustration of snake mutants is detailed and moving and graphic and beautiful. art by Journeyman


Common between the texts:

covers:  Yannick Bouchard’s covers are shocking and attractive as per the usual.
copyediting: lots of errors which are slightly inconvenient, in one case a table has a duplicated entry. the errors are often quite obvious, it’s strange to see this from this publisher


overall: I have these pdfs in my back pocket, but I’m not tempted to run any of them, even fragments of them, very much at all. That’s a huge departure from my lotfp experience. They do not seem high quality or innovative (exception: OSR2 - ed).

thanks to +K Yani for purchasing GTFO for my review.
Posted by Peter Webb at 6:33 PM No comments:

melee
--attacker rolls d12 and adds strengthmod + ab
--defender does same
--winner does damage to loser equal to difference between results
--you can only deal damage in melee x number of times per round where x= your bab (overcomplicated rule, might drop -ed)
--ties = miss

ranged
attacker rolls d8 and adds dex + ranged ab.
if they roll higher than the defender's Dodge score, they do damage equal to their result.

weapons
weapons don't have different damage values but have various bonuses and drawbacks like
greatsword/greataxe +3 damage, two handed
rapier +1ab
dagger = light weapon can be used in grapple
heavy crossbow +3 damage, takes a round to reload

I've been saying the word "comprehensive" a lot lately. HK is comprehensive. It feels like a total package, the developers accounted for everything and really had the opportunity to make the crowning metroidvania xperiene they wanted.
I think with both these games I got the sense of developers working really hard while having the funding to take a lot of care with their product. there is so much and it is so generous and well-apportioned. you sit with the other nervous teens at the feast and everybody eats
Posted by Peter Webb at 11:06 AM 1 comment: 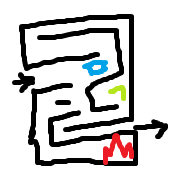 mazes:
drawing a maze as they explore is actually fine. you can easily put things in the maze while you sketch the paths and make decisions about which way is the right way. trick is to make those decisions before the players decide which way to go if possible

riddles:
difficult to come up with a good riddle on the spot

monsters:
a good monster can just be something stereotypical with a twist

traps:
seriously easy to think up... again just think of it before the players encounter it. blades in the dark jab out at you... there's a magical energy field generating blades. and uh it's coming from a little magic machine running in the corner. great trap.

treasure:
can actually be negotiated with players as described or invented randomly

puzzles:
I would say that you can actually make this up as the players solve it, similar to a maze. you see a bunch of colored blocks that can be rotated. green yellow blue orange. they correspond to... some charts on the wall. the charts? well there's a series of checkerboard patterns that have those colors... no, it's too difficult for me to draw out... yes, let's just have someone roll an intelligence check... you can bail out

secret passageways:
as convenient (goes without saying) and you get to use fiat  whether they find any in a search. it's important to use fiat. because life is arbitrary

an overall sense of dungeon logic:
will emerge as you play.

what I want and do not want in rpgs

I read " I feel the compulsion to explicitly state the things I desire in play and assumptions in the material I write, " in scrap's post and have, honestly, been gushing over the pig pip stuff zak put out lately.

what I want in rpgs:

1. a framework of power
in the game, the king's guards can protect the king from most threats, there's a military logic behind it. you can always refer to that logic. this is how you get cool stories in like plays. in "sexy beast" a retired mob employee is being pressured by his superior to come out of retirement. the retired mobster does not want to come out of retirement because he is afraid of death, but he is also afraid of angering his superior who has the freedom to beat him up and maybe even kill him. the superior doesn't want to kill the mobster, his former friend... thus a drama. in the end the mobster kills the superior and then has to go deal with the superior's superior... consequences for the actions along a framework of power, a basis of drama like they taught me in playwriting class.

2. fun potential power levers
this is what lotfp has with the "summon" spell, or all the little rules which can be cleverly used, like casting "bless" to aid a pickpocket attempt. fun because they're clever, fun because they're dangerous, fun because they feel fair... that's one of the great uses of magic in games. powerful artifact has bad downsides.

honestly #2 is optional because with #1 I can just come up with fun power levers in whatever setting it is. my "top secret" campaign was one of the best bc the players would just use their knowledge of 80's airport security to bypass challenges.

.do not want:
1. railroading- a loaded term but basically any understanding applies
2. complex world of warcraft style combat which will always always be difficulty and pixel-bitchy and take too long to run.
3. non-optional homework. I should be able to drop in, having like library content to pour through can be good but I shouldn't have to or we should be able to do it quickly at the table.

interesting note here is that both categories above reflect a player's desires.
Posted by Peter Webb at 9:43 AM No comments: