This movie at heart is about troll sex. The film is similar to the director's previous hit, "Let the Right One In". This guy is establishing his own cinematic universe-- modern day monsters in Sweden.

The prosthetics glued to the actors do get in the way a little but they are pretty good. The sexual attraction between the trolls is the best. They are sniffing and it feels relatable and revealing. The actual sex is somewhat shocking.

However the B plot which is about child pornography unfortunately feels folded in by coincidence with the A romance plot, and the movie's pacing struggles in the second half also. "Let The Right One In" had a more functional and compact story.

There's some amount of ironic gravitas surrounding trolls and baby-stealing which, like in "Let the Right One In", plays off the original emotions of the mythology. However as I said the conflict is a little less centered and therefore the protagonist's struggle at the climax fell flat for me.

Which do you exclusively choose: community with others of your kind or a sense of universal ethics? I don't think the film suggests a more interesting question.

The films are mirror images of each other. There's an obsession with sacrifices made by fire. Cults and manipulation in the face of grief. There's a formula:

Like "Rosemary's Baby" or "The Wicker Man" pretty much but with family trauma and loud crying scene upfront. The contrast between grief and the supernatural is what "Hereditary" receives praise for. I think both films don't stick the ending.

"Hereditary" has a perceived resolution with the Mom hanging above her son (Peter) and cutting her own head off with piano wire.  Unlike my mom who would never do that. In "Midsommar" the main character watches her boyfriend burn alive in a bear suit.

I think it's about the cult in both cases-- in "Hereditary", the cult is mostly invisible, and therefore their web of power can be easily imagined. The supernatural flourishes in the dark. In "Midsommar", the cult is very visible.

"Midsommar"s visibility leads to a lot of beautiful and striking crowd scenes. It's all shot in a giant field which, by the end, feels claustrophobic. The utter presence of every building in every exterior shot is a notable accomplishment for the filmmakers.

However, the acts of violence that start piling up feel too extreme for the Swedes. By the end it's a horror movie bloodbath. What we deserved was a more nuanced and realistic tale.

It's a case where utter visibility defines, for me, stricter requirements for my suspension of disbelief. 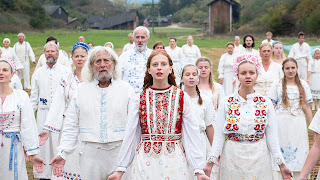