Have been waiting a long long time to play this. It's super violent, you get covered in blood the longer its been since you've saved, which is nice. Also it treats violence the way Bioshock does, with you questioning your role in the ecosystem by putting you up against evocative enemies: priests, mobs with torches, werewolf ppl, etc.

This game has "punishing and rewarding" combat which relies heavily on timing. Sadly it also relies on a drip-feed of healing potions which are sometimes sparse, sometimes plentiful, and because they drop randomly from enemies, it makes me feel like often my deaths are from a lack of grinding.

There's more to be said about the potions plenty/scarcity; sometimes you have to play survival horror, sometimes you can bloodily tank + massacre everyone. But there's no grease on the ropes here, to buy xtra potions you have to sit through 2 loading screens.

It's the loading screens which are the issue I guess.

"Inside" is miles ahead of "Limbo", for being a playable cutscene. Streaming this for my buds Angus and Corey was really fun bc they were so pulled in.

Made more sense to me, felt that more poignant, when I heard the creator has a degenerative (?) heart condition which the story in this game is broadly a metaphor for. Otherwise it just seems like stock imagery, narrative wise, a black goo monster/sickness.

I played to the simple end, but uhh... it's an appealing game with great combat, and it should have all the appeal of the mystery of its ruins-filled world, but something's missing for me... genuine inspired elements like decayed frozen titan hanging off side of zelda mountain, these seems underused... deeper story about genetic modification kinda ends up being about generic monsters in tanks.

What's really cool, tho, is the ambiguity provided by the HUD elements. Due to the diegetic cnxns between the avatar and the data presented to the player, mostly routed thru a little floating homonculus, it seems as if yr player character may actually be in a virtual reality themselves. This is supported by the dataish way segments of the floor keep popping in and out; but I really like that homonculus... 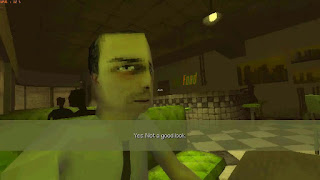 A short walking-simulatorish game which has 1-3 cool bizarre moments and one very cool facial rendering technique. This is a good case to ask whether or not a short, surrealist, and boring game does enough. In my experience it was a pretty intriguing setup with a very small payoff.

This seems like one of the first Adult Swim game releases not based on an TV show. The cute illustrations on the package do not match the brutal and alien gameplay visuals. This is a lot like Knytt, if you've ever played Knytt, but it has many more surprises, incl. very cool weapons.

You run around and eat/be eaten, with a lot of depth resting in an organic balance between predators, prey animals, spears, plants, etc. which deeply rewards experimentation and improvisation.

I am not sure if I am crazy about the save/death system. You need to survive a certain number of saves (meaning: trips between save points) for certain doors to unlock. It seems to encourage an organic form of exploration: you need to survive to explore more. Dark Souls however had a tighter sense of rhthym, more arcade-y, this is a little loose and wobbly. That being said it's stylish and I need more time to analyze its effects, I have no idea how big this game is.

May have been innovative in ps2 days, this game is the quintessence of a "beat up homeless" simulator. It doesn't shy away, in the enemy design at least, from realism tho, so there's something to be said for the horror therein.

I stopped playing when I got to the bit where you meet up with your radio contact, who turns out to be a horrifically reskinned version of the player model, who is an anxious timid italian man (the player is an italian man, the radio contact is a middle aged black women with glasses).

Certain level of unwritten rules in this game, like "text can't overlap with other text". The whole game is based on writing rules to solve sokoban puzzles, so occasionally the unwritten rules throw a wrench in the gears.

That being said this is such a perfect puzzle game, if so because it takes very little for granted, all objects have only pictoral value and are assigned meaning via on-screen puzzle pieces. The arrangement of the non-negotiable rules-pieces can make aesthetic flourishes, like a good layout in a magazine:

Fun to chat with this thing, albeit its cyber horror leanings are too archetypal.

Binding of Isaac
----------
The music is actually quality, drops and serious beats, and the visual aesthetics are original... The whole theme is child abuse. Like horror/comedy.

Gameplay after years of playing still holds up. =randomly and slowly lvling a more and more fucked over kid, with v. serious and lovely endgame aspirations. A warm and generous skinner flash classic.
Posted by Peter Webb at 12:19 PM 2 comments: 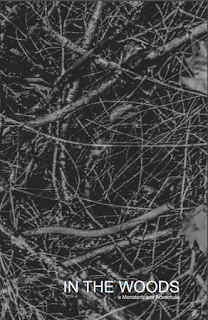 Once you get all the papers settled you'll have a good time with In the Woods. I have it on authority that Pearce Shea pretty much put this together in a fever state, which is saying a lot for Pearce's fevers....

Let's go ahead and say what happened: 3 players went to the woods, and they saw some shit. They got out after two-and-a-half hours. It was pretty good~! It drew people in, it really did.

"In the Woods" is a fairly large document that was pretty easy to run. Even the navigation, given the lack of a map, wasn't that bad. This is a puff piece.

There is a map, but it's supposed to be secret. There's a lot of unspecified elements of play, the text written specifically to include lacunae as is the wont of indie rpg games. The DM makes up a bunch anyway. Although its worth it to note that In the Woods intentionally includes game-design-lacunae as a means to engender a creepiness.

That being said, the non-lacunae are surprisingly solid. You bounce up and down on the floors of this thing and it holds! It's not that surprising. There's a solid construction:


There's mysterious elements, not given much explanation. There's some factions in the hex map. There's a serviceable lightweight combat system.

Benefit of horror often is to keep you guessing at the elements. RPGs tell a similar story, bcuz players elaborate on an archaeology. You won't discover all of the elements; but you can, maybe construct an explanation; but I, the narrator, am waiting, there to stick a thumb in your eye...

to purchase: https://gumroad.com/l/fWSrw
Posted by Peter Webb at 10:48 PM No comments: