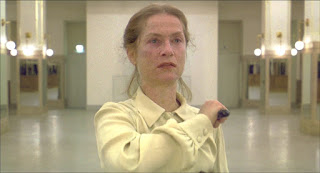 I want to talk about the face Huppert makes at the end, which I once said I wanted to get tattooed on my thigh. The self-harm and anger as defiant, extreme emotional contraction, I think acknowledging that there is nothing there beneath the face. Like you get the autist's rage and you think, "woah, they're angry", and it's about some bullshit but then you're like there's that sliver of a person underneath there like an angry nerve inflamed and pumped up. And it's only a sliver of person.

I genuinely think part of a person is the lack of a person, the frustrating sense that there is nothing there. I imagine touching like a hollow of skin and feeling nothing but scar tissue and the person knows you're there but it means being apart of someone's trauma and NOT helping.

Having sex with traumatized people and depositing your experience in a apart of them that's just scar tissue and the other people's deposits and the few remaining cells working on breaking it down. Putting work on someone's shoulder's, burning through one layer of scar tissue. You're contributing and you're painful and want they want is not what you want. Knowing this and repressing it.

I have sympathy for the STATE OF MIND, I have sympathy for the KINK. Which is the formation in your brain, which you play around with, you digest like it's a pile in your asshole. You don't mind that it spurts blood, but when it does, when you're fucked, it's painful, and it's EXHILARATING. But it's still something fundamentally dead.

Or is it? Ultimately? Toi Derricote says she bloomed as a person in her fifties after finally processing that trauma. The danse macabre.

The dead dance, the dance of death. I love this dance, I love it's cold claw embrace and the puppeting and pirating. The feeling of something uncontrollably unconscious descending and picking up and rippin at the deeper brain, the inevitable pill thru the grey matter.
Posted by Peter Webb at 12:06 PM No comments: 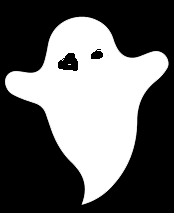 Posted by Peter Webb at 9:47 AM No comments:

Watched this movie because my friend Rachael recommended I watch it. Ok, I've talked a lot recently about my switch over to a more "violence friendly" style personhood, meaning, I'm not totally opposed to violence like I used to be.

I had a friend who talked about beating up someone's abusive boyfriend. This friend was a person of ethics. Obv I'm not sure if beating up someone is even a good way to guarantee that they stop abusing anyone, fiction would say no, but as punishment I think there's a sort of lawlessness or frontier-justice style appeal which is ofc dangerous and likely to target the wrong ppl etc.

As with 'Irreversible' :Seul Contre Tous: opens with the mistaken case of violence ruining someone's life, a buncha ppls, albeit to the film's credit it posits the life of this man The Butcher in a way such that the act of mistaken violence he has committed was in his past and was something he learned from and took into his self. There's a sort of "committal of violence" which I appreciate; the process of picking up trauma in your life years after the fact (and the wounds) in any way, pride or not-pride.

I'm not proud of the butcher but something in my heart really loves him and I think its the film's portrayal of him, which is of credit, he is a man of character in the classic sense in that it's not fucking around, it's a person, o.k. You take a film which has no bones and lightly mocks the offended viewer about the presence of evil, I said to my uber driver later that I think humanity includes evil in a really special way, I would not pick the human world without violence I would not consider with the rage in my heart the evil of ppl etc. There's nothing to gasp out but a cloying service to the statute, "I stand alone", to be a person in destructive motion, is basically admirable, pathetic.
Posted by Peter Webb at 10:47 AM No comments: