it is edited badly. sally hawkins is enchanting as the reverse end of a monster-human relationship. the score is cornball. Octavia Spencer is good, but a little cornball. Then we have the white guys- Michael Stuhlbarg, Michael Shannon, and the indomitable Rich Jenkins. This movie is insane, it gives the three white guys SO much screen time, some of it is good like the Rich Jenkins relationship with a pie counter clerk but a lot of it seems intent, laser-focused-in on exploring a white supremacist’s background life, & this boring scientist guy, and even Rich Jenkins talking a lot reveals this movie has very little to say

I think it’s ‘cause Guillmero thought he could bring out some of the sharp edge out of the white supremacist dude, like he did with that Spanish General in “Pan’s Labyrnith”, that we spend so much time with the antagonist’s home life, buying a car, the pressures of his job. But, thankfully, there’s just nothing there, the dude is a fascist and you can see the vein popping out of Michael Shannon’s forehead TRYING to bring some sort of a humanity to the position


“Crimson Peak” was another less successful long-scale experiment in trying to convert golden age horror into, like, a soft-focus modern feminist drama with f/x, Crimson Peak was also _very boring_, it seems Guilmerro really loves and wants to take his time with the individual swimming details of the set and the ornamental character personalities. It’s like a Studio Ghibli film, like if it were all Spirited Away, with 90% less detail (more lke, 200% less) and less characters etc, and it’s slower because there’s -less stuff-


THAT BEING SAID that kind of joy that made the original Hellboy good rears its head a couple times like with the dream sequence near the end, but uh there’s still a lot of deliberation on “glassy green water” looks


THE FEMINISM OF MONSTER DICK:


movie does a VERY GOOD JOB of encapsulating a male sexuality as the target, something to be contained and fought over, with 1 (one) phallic object and a bunch of yonic objects in the mix, just the idea of a captured/vulnerable sexual monster that ppl fuck, as a male figure, it is definitely a male monster rescued (spoilers) by a female main character and they have empowering consensual sex


its badly edited tho but it makes it seem half-awkwardly like Elisa Esposito is like, from the start, zoomin in, super into this monster man. I’m being unfair, at the start its clearly curiosity, the film does a good job of revealing Elisa’s attraction to the monster-man in retrospect, like all along she was in it to win it... Which is kinda a thing, right? In the space in my little brain it doesn’t have enough room to process upfront that Elisa would be immediately attracted to The Thing From The Black Lagoon, but she totally is


it still has this sort of throwaway sexual harassment subplot which is brief but not brief enough and I think is simultaneously too much and doesn’t go far enough, not meaning “there isn’t enough sexual harassment” but rather I mean it ends up in easy movie characterization territory, vile


vis a vis Elisa’s status as a mute character: the film is pretty good at going the distance with this one, but it’s still an uncomfortably central dramatic theme, like the ability to talk/not to talk, its pretty bald at times


the white supremacist’s journey actually is a little interesting, he’s kinda swirling down the toilet bowl of materialism, pop psychology, he actually makes a break for it but gets reeled back in, it’s half-sympathetic, and at the end he realizes “ooh there’s actualy NO LIMITS” and he gets his throat cut


which, again, is Guilmerro Del Toro’s half-decent attempt to try to soft bush a villain but it comes off as too generous in my opinion, we have already been informed about what’s going on
Posted by Peter Webb at 7:01 AM No comments:

THIS REVIEW is mostly inward-facing to people who have already read or indeed, written the product. To those who haven’t, suffice to say that even if you don’t play RPGs, the text of “Deep Carbon Observatory” is notable literature, being serious and well-written and not fucking stupid like every other piece of rpg material under the sun.


...but I think crabsmash as written sorta functions as a violation of that principle. Sometimes random instadeath, fersure, if you think that you’re exempt then look sometimes rocks actually fall and everyone actually dies in real life and if you’re using save vs. death as common as it is in most lotfp products isn’t that “random instadeath”? But really, the entire thing makes me uneasy, in a way that I like.

Biggest overt issue is the geography of the flood not being too clear, even one sentence like “the flood extends for miles before turning into pseudo-swamp” would have cleared everything up.

The other issue is the practicality of everyone starving. "The water of the river is ripe with life, over-full with predators and fish of every kind." Players pointed out this was ideal fishing, which seemed kind of obvious.

Also to stop all the villagers from just becoming refugees I had to say some stuff about how the village was 2 weeks of travel away from the rest of civilization, or any source of food, which was odd, because there was a river right there

Minor issues that maybe are just the referee’s responsibilty: figuring out relative speeds in flooded areas, translating the Crows’s AD&D stats, figuring out the geography around the dam (mountains, thanks to the authors for help on this), the physics of the scratch-built dam, and yes, the clearness of the maps.

I posit: that if the referee is gratious in their warnings, and if the players are -all- trying to stay alive and are somewhat good at it, you can run a game of Lamentations of the Flame Princess where everyone starts at 1st level AND there is extremely lethal shit everywhere AND if you die you restart at level one AND some player characters survive and level up.

When I first started writing play reports for this system ‘lanir’ on the forums was talking about how I was basically gonna burn through players until I found some who liked my playstyle. I really was trying to create a roleplaying game where:
...and with a handful of other values which I enforce more or less conciously, like “no fudging”.

After about 2 years of play I think I found some players entirely willing to play in the above frame of mind, where stupid mistakes in lethal situations are usually lethal. I did have to burn through a bunch of other players to find these couple players. But then again the burned ones have their own group now, which I’m apart of, we’re playing GURPS…

(I might ease off the difficulty in the Veins campaign, because I’ll be writing it all myself.)

When I first started LOTFP dming and I ran “tales of the scarecrow” I was laughing in the faces of my frustrated players. This sounds bad and is bad I guess but also that was kinda how it was in that group of people. And then there was the time where I did just the heart puzzle from “Fuck For Satan” for my brother and his girlfriend and how they were hounding me for the answer for hours after.

One night after a roleplaying game I was walking with my friend Dave and I had a little broken buddha statue in my pocket. I said, here’s a riddle, what’s in my pocket? Dave couldn’t guess, even after 20 questions, and I was like, O.K., you lost, I won’t tell you. This seemed essentially unfair to Dave. What was I gaining? (I did tell him)

I sort of thought that way of the grinning game master who has the knowledge that you don’t have and the allure and the power-mystery was kinda something to bring to my friends’s tables back in 2014-5. These days I still do it, but with a subtler hand, and with plenty of warnings beforehand: this game is going to be super hard, you’ll probably all die… and although it’s still frustrating at times it also gives out some thrills: 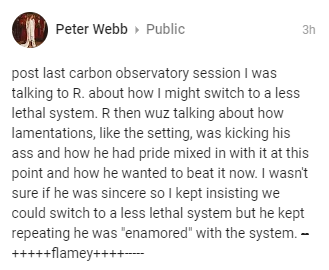 Posted by Peter Webb at 3:44 PM No comments: